This recipe is straight from my Grandma Mary’s kitchen. If you haven’t heard of Fideo before, it’s what I would call “Mexican spaghetti”. This is the stuff I grew up on. It’s my Mexican comfort food. And here in Houston, Texas we have some of the best Mexican and Tex-Mex restaurants in the country, unfortunately Fideo isn’t always available at these restaurants. But on the rare occasion I come across it on a restaurant menu I have to get it. It’s always good, but nothing comes close to my Grandma Mary’s Fideo. It’s in a class of it’s own. This recipe will always warm my soul and make me think of My Grandma Mary and my Great Grandma Butcha, who I hear was a master in the kitchen. I only wish I was old enough to have gotten the chance to cook with my Great Grandma Butcha when she was alive.

Most comfort foods usually take a lot of time and ingredients but not this one. You can make this on a weeknight after work, and is very easy to prepare.

Don’t have Fideo noodles on hand? No problem, my Grandmother would sometimes make this with the little star pasta.You can leave as much liquid in this dish as you like. I don’t care for much liquid in mine, but if you prefer to have more of a sauce with yours, simply simmer for less time. 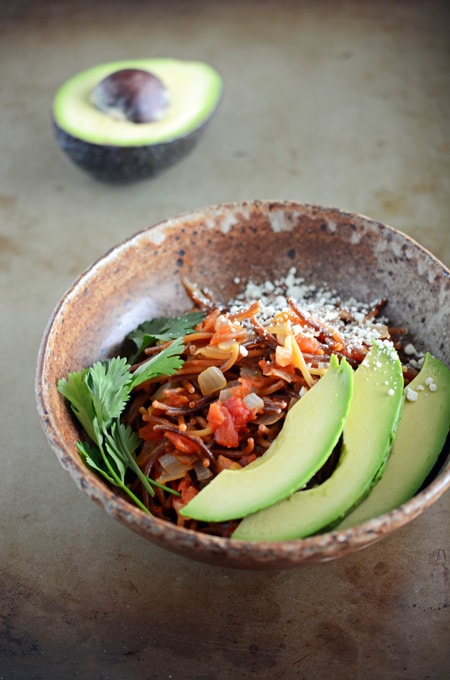 Nutritional information will vary according to the ingredient brands used.

I can't wait to make this! I always wanted to get this recipe and remember grandma Mary's fideo.

How have I never heard of this before!?! Mexican spaghetti is the stuff of my dreams! This looks incredible!