I had so many different idea on what to do for my Birthday cake this year. I normally don’t do them for myself, but since it was the big 30 I just had to do something. I had decided to design it after my online Birthday invitation but I just wasn’t feeling it and decided at last minute to change the decorations.

I wasn’t as prepared for this as I should have been. The weeks prior I was just so busy that I wasn’t able to devote a lot of time on it.

For the cake topper I decided on some candles and some gumpaste/fondant spirals coming out from the top. My original design was going to be a champagne bottle with fizz shooting out. But the gumpaste bottle was too big and just wasn’t going to give me the look I wanted on the cake. So with the spirals and candles on top I just decided to do a confetti cake and just make it look like a party was going on on the cake. Once it came time to put my gumpaste/fondant spirals on they just broke as I stuck them into the cake. I only let them dry 2-3 days so that’s my fault. I think it’s usually supposed to dry about a week. Like I said before I was just not prepared as I should have been. So now I was stuck without a topper! Frustrated I was almost about to give up. (But that’s just not me.) Now with a bunch of holes on top of the cake I also had to figure out something to cover those nasty holes. I thought fondant roses but that just doesn’t match the theme of the cake. It usually helps me to take a few minutes and gather my thoughts and get my creative juices flowing. So as I sat in my cake room looking around for something to put on top of this cake that goes with the theme, I see my multi-colored pipe cleaners. LOL. I thought well I can bend those and make swirls out of those and they are the right colors so I gave that a try. Then I stuck some black feathers I had left over from another cake topper I made and stuck those in to hide as much of the ugly holes on top of the cake. It worked well. In the end I liked the pipe cleaners idea better since I could actually move them and bend them how I wanted.

Now one mistake I did was when I torted the layers I didn’t but the damn of icing close enough to the edges and that made the corners droop. I was not happy with myself on that and I think that’s the only thing I hate on this cake. But you live and you learn and next time I will know. Every cake is an experience!

The flavor of the cake is Pink Champagne with Buttercream and Strawberry Filling. The size is a 6 inch square and an 8 inch square. They were about 6 inches high on each layer.

It looks so nice Mary! Happy Birthday Mary, I hope it was great! :) 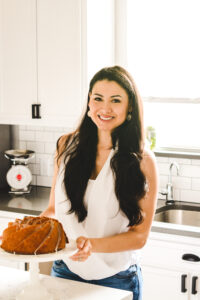