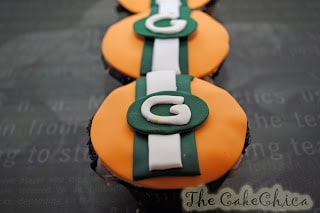 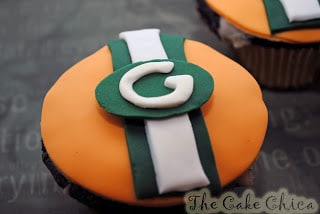 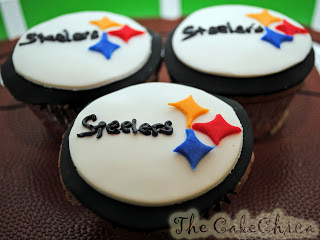 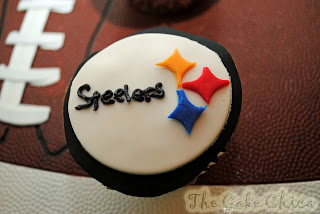 The Packers gold color I made from a piece of premade Yellow Wilton fondant and mixed with white Satin Ice and mixed more coloring in it. It was a mix of Americolor Gold and Wilton Yellow and I think I did a touch of Wilton Orange to get the Packers gold color. I thought it turned out perfect. 🙂

For the Packers dark green color, I used the premade Wilton fondant in Green and mixed a small amount of Wilton Black. I was happy with the colors.

For the Steelers cupcakes I used black and white Satin Ice. For the stars I used premade Wilton Blue, Red and the leftover Packers gold color. I used a pastry tip to cut circles in the different colors, then used the same pastry tip and cut the corners of the circles and there you have the little Steeler’s stars.

I ordered some edible ink pens which were scheduled to be delivered on Friday. Well the freeze happened and I still don’t have my order so I had to make do with what I had. I had some leftover buttercream and I used a lot of black to color it and mixed in some piping gel. And that’s what I used for the “Steelers” piping on the cupcake.